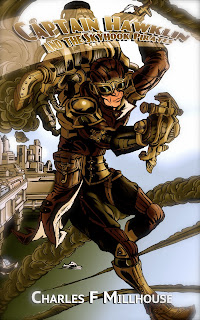 The adventure begins when Crown City is attacked by armored rocket propelled men charged with finding the Amulet of Horus, an ancient medallion with infinite power. If in the wrong hands the talisman could give the wrong nation the edge on world domination.

The mastermind bent on acquiring the amulet is Skyhook, a mysterious masked man with the forces to obtain it. He is ruthless and cunning. His knowledge rivals Captain Hawklin on every level and he is willing to kill anyone that gets in his way.

Captain Hawklin and the Skyhook Pirates is a golden age adventure story, filled with Heroes and villains, cutthroats and G-Men, pirates and spies. It’s a story filled with intrigue and deception that will keep you guessing through all the hair-raising cliffhangers till the very end.
Order your copy here

From Chapter One of Captain Hawklin and the Skyhook Pirates

When Leslie realized she’d been pulled up into the air, she grabbed hold of her assailant with her free hand. Terror flooded her heart as they flew higher. She went limp from the shock.
The sliver-armored Projectile Man flew back toward the dark cloud with Leslie limp in his arms.  Unaware another rocket-propelled man pursued him.
When the Projectile Man saw the smoke trail of his pursuer, he tried to warn his companions, but they were far out ahead and did not see Captain Steven Hawklin arrive.
Captain Hawklin circled the Projectile Man with incredible speed, leaving a smoke trail from his own rocket pack while he zoomed in for his first attack.  Through goggle-covered eyes Steven saw the flying device on the Projectile Man’s back.  It was a rocket much like his own, but more crude in design.
Steven set his sights on the Projectile Man’s propellant, and he raced in to rescue the ginger-haired woman from the tin man’s clutches.  Before Steven could act, the Projectile Man released Leslie to plummet toward the Earth. It rocketed toward the dark cloud in hopes of escape.
Steven reached for his revolver strapped to his leg, and fired two shots into the rocket strapped to the Projectile Man’s back.  Sparks and smoke exploded from the rocket, and the Projectile Man fought to fly back to the city under failing power. The other four Projectile Men disappeared into the dark-red cloud.
Steven drew his attention to Leslie. He rocketed toward her trying to reach her before the fall ended with a bloody mess on the street below.
Returning his pistol to its holster, Steven pulled a long, narrow device from his belt and fired a line toward Leslie.  He held firmly onto the other end.  The rope shot past her and exploded out into a net, catching Leslie as easy as a fisherman catches trout.
The Projectile Man’s rocket pack sputtered and misfired. He fought to reach the rooftops. Out of control, the Projectile Man rocketed around the roof like some carnival ride, zigging and zagging around in circles until the rocket finally fizzled out and the Projectile Man crashed to the roof.   Setting Leslie down gently on the roof where the Projectile Man had fought to land, Steven’s rocket made a winding sound when it powered down.  He pulled back his goggles and skycap; soot from the bellowing rocket pack outlined his face.  His blond hair was matted to his head with sweat. The leather of his right glove rippled as his hand tightened around the hilt of his pistol, and he pulled it from its holster.
The Projectile Man laid on his back and tried to stand, but like a turtle flipped on its back he had little luck.
Steven tapped the end of his gun on the tin man’s helmet.  “Don’t try and get up,” he said in a jovial manner.  “The police, I’m sure are on their way up here now.  Replacing his pistol, Steven took hold of the Projectile Man’s helmet in his two hands and pulled it from the invader’s head. Steven noticed a banded mark of an X on the right cheek of the man’s weatherworn face. “I’ve see that before.”
The man rolled his eyes to look at Steven.  He struggled to breathe. The invader muttered in a German accent. “Too…too powerful to be…to be stopped.”
Steven replied in German.  “Who are you?” The man did not answer.
The roof entrance to the building burst open, and several police men armed with machine guns ran onto the hot, tar roof.  Steven looked to the sky. The looming black cloud had vanished.
“You all right Captain?”  One of the Crown City’s finest asked, while the rest of the police circled the Projectile Man.
“I want him taken into custody,” Steven said pulling his skycap back over his head.  “I’ll bring the lady in to make a formal charge within the hour.”
“Do…do you think we can handle him?” the officer asked pulling off his cap to scratch his head.
Steven replaced the goggles over his blue eyes.  “Just don’t let him near his weapon and you should be all right.”
The officer looked back at the Projectile Man and swallowed hard in trepidation. He turned back and watched Steven scoop the unconscious Leslie Carter into his arms and blast back up into the sky leaving a trail of smoke behind him.